The dream that got me through covid…

As the world tightens back-up again with yet another variant of covid – and why is it named after a transformer 🤷🏻‍♀️ – I know a lot of people are feeling discouraged. It’s been a long haul to say the least.

This week I’m sharing the story that helped me through that first initial wave, and also carried me through.

First of all, self-care.

And not my regular routine, but stretching out my walks to sometimes 2 and 3 hours a day. They kept getting longer and more frequent. While I walked my dog Grace, they were truly my “saving grace”. I was fortunate my kids didn’t need a lot of “hands on” attention, although we did play basketball every single day! Ella and Dad against Jude and me. It was super fun until someone became a rager – ahem the teenager 😳

But what happened on my walks became magical. I ended up seeing this lot that was for sale. It lovingly became known in our house as the “magical fairy lot” 🧚‍♀️ One of the neighbors described it as their very own botanical gardens. It was truly magnificent and for sure where fairies would live 😉

So, I do what I do, and enquired. The previous owner had owned two lots, one had her home on it and the second was filled with massive trees and a variety of plants. There were walkways throughout and even a little pond.

I was in love.

My wheels started turning and I really went full on into this plan. I had everyone visualizing and the kids revisiting the movie the Secret.

The builder was splitting the lot back into two and building new homes on each. The one with the magical fairy lot, was almost a 1/2 acre – unheard of so close to the beach – and they were going to maximize the sunken down lot by making it a two story with main floor living on the top and most of the bedrooms on the bottom – as opposed to the top half being a second story with bedrooms. So, the ocean view would be through the kitchen, dining and living rooms.

It was quite something!

So, I talked to everyone to try to make this possible as it would have been a stretch – real estate agents, different lenders who specialized in constructions loans, friends who had privately bought land and financed through the seller… you name it I was on IT.

And when it finally looked like we figured out the “how”, my husband said it didn’t feel right.

Man did I try to convince him.

He didn’t like the idea of how high the house on the other lot was going to sit. And let’s be honest this was a lot of moula to put toward this if the royal we weren’t into it.

And I could see his point, so I conceded.

What happened next was pretty cool. Not environmentally withstanding, but in terms of validation that we made the right decision.

They cleared out the entire magical fairy lot 😢

Which I get because it was the way to get an ocean view, but still. And that was what I really loved about it.

I also did a session with an intuitive, and asked about this house. She said we would love it, but something would be wrong with the plumbing that would be expensive to fix. I thought that was weird, because it would be brand-new construction so any issue really should be covered by the builder.

Well, low and behold they put the pool equipment of the other house, right in front of the only ocean-view-deck associated with the house we wanted. Can you imagine spending all of that money for the ocean view, only to sit on the one area with a view and it being super loud? That would have been highly disappointing and something we would have paid out of our own pocket to have moved if we even bothered.

Well, it finally sold last month after it was finished, and I was able to walk around the backyard. And sure enough, the second house looms over not just the backyard, but the entire patio area offering zero privacy.

My husband was right.

The intuitive was right.

It’s such a great example of trusting our gut instincts even when we’re not sure why AND checking in along the way when things start to feel off. It is a beautiful home, but I definitely started talking myself into it when the fairy lot was destroyed.

And what ended up happening?

Well, during a heart-to-heart with my husband after we agreed we weren’t going for it anymore, he said he would really love a spot in the mountains. My dream had been to move to the beach, which he loves too, but his ultimate is the mountains where he can snowboard galore!

So, I did what I do and got on it!! I’m pretty sure he didn’t mean for me to move so quickly, but c’est la vie that’s me!

And so, we landed on Lake Tahoe. We had been there the summer before and were blown away by its beauty. We had no idea! I of course looked up real estate when we were there too 😉

And that plan was put in motion and was in itself its own journey.

We closed in July, did a whirlwind of renovations and started renting it out almost immediately 😍 Did I mention my second love is real estate investing?! 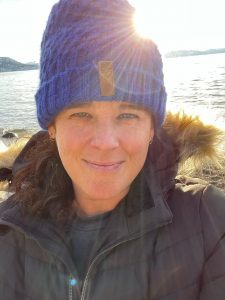 And here I am over the holidays, where we just “happened” to catch the aftermath of a record-breaking storm! Holy powder Batman!

And… it was almost a year to the day of when we made the decision to go for it!

And the trees, mountains and lake are completely magical 💙

So don’t be a victim of circumstance! What is in your heart to create and manifest right now? Use the extra time at home to ask, visualize, take inspired action and tune into your gut along the way. It will never lead you astray.

It’s these dreams that keep us alive and growing!!

Let’s connect on social if we’re not already 👇